Frank's Red Hot Sauce originated in the late 1890's when the Frank Tea and Spice Company stumbled upon its recipe and immediately gained enough local fans to begin marketing it in 1920. Ingredients in this hot sauce include mixed spices, garlic, vinegar and cayenne peppers that are aged and then mixed together to create the now famous sauce.

Franks Red Hot Sauce initiated a marketing campaign a few years ago and is now known for a humorous commercial promoted by an elderly lady named Ethel who talks about her recipes while standing in front of a Catholic priest or Queen Elizabeth II. Ethel finishes her monologue by saying "I always put that s*** on everything!" which, of course, does not go over well with the Queen or a priest. 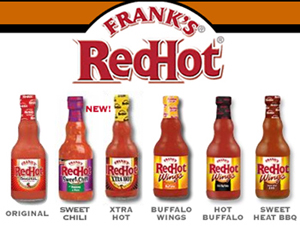 Other kinds of Franks Red Hot Sauce which Ethel recommends include:

Recipes to Spice Up That Party

With Frank's Red Hot Sauce, you can make any kind of dish taste like a spectacular array of delicious fireworks bursting in your mouth.

Take one pound of ground turkey and

Brown the ground turkey in 1/2 tablespoon of oil in a frying pan. Sauté the ginger, garlic and onion using oil left over until light brown. Then add the sauce to the other ingredients and simmer for five to ten minutes. Spoon the mixture into lettuce cups and serve as an appetizer.

For this savory lunchtime favorite you will need:

Using two tablespoons of Frank's sauce spread the bottom of each hoagie roll evenly. Then begin making the sandwich by layering the meat slices, cheese and pickles. Lightly drizzle each hoagie with one tablespoon of hot sauce and wrap each of them in foil. Warm them in an oven for about ten minutes at 325°F or until the cheese melts and hoagies are lightly toasted.

Mix the sauce, lime juice, oil, zest and garlic together, then pour 2/3 cup of marinade over the shrimp. Cover and refrigerate for around 30 minutes. Stir the other marinade and cilantro in the salsa mix. Put shrimp and bell pepper onto metal skewers and grill them for about eight to ten minutes, or until the shrimp looks pink. Serve these savory kabobs to hungry guests with any variety of Franks Red Hot Sauce and a big pitcher of lemon-flavored iced tea.